It’s a shocking fact that many young kids spend most of their time playing games on smartphone and tablet devices. During cold winter days we really can’t blame them and actually many smartphone games can help stimulate brain development.

However in summer, you should definitely try to organize outdoor activities and games for your kids to stimulate motoric and physical skills as well.

Smartphones are closely related to addiction and sleeping disorders. That is why it’s hard to achieve balance between smartphone and outdoor activities. There are also many sporting apps that can combine these two kind of activities. If your kids are really into technology then consider buying them a Nintendo Wii. This console is much better alternative to other popular consoles because with Wii kids are actually physically engaged with game.

Also overuse of these so called “smart” devices can lead to OCD also known as obsessive compulsive disorder. Although many adults also have these kind of disorders on smartphones. Example: frequent email or social media checking. OCD can be more damaging when it comes to younger kids.

See this too: Top 10 Outdoor Party Games (Besides Cornhole)

Being exposed to new things and exploring the world physically will help them think more widely and be healthier.

I am not saying that you should completely forbid use of smartphones, however you need to work with your kids towards achieving ideal balance between outdoor activities and playing smartphone games.

Don’t get me wrong, apps such as Lumosity and CogniFit Brain Fitness can help with brain development.

We present you only the most exciting and fun outdoor games that will help your kids with mental and physical development.

Also these are all fun backyard games for kids birthday parties. 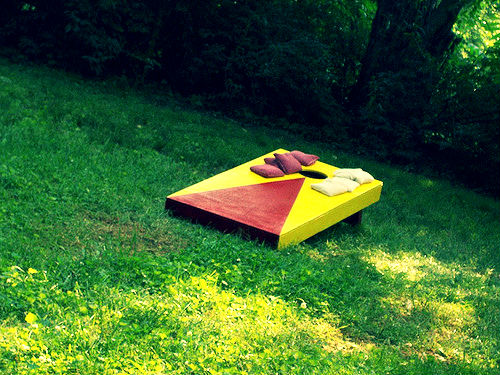 You guessed right, cornhole is the first outdoor activity on our list. The rules are simple, you need to toss a bag into the cornhole board hole. The distance between you and the board should be 27 feet. The first who gets to 21 points wins. You can read about cornhole rules here.

Off course you can modify the rules to make them more appropriate for your kids. For example you can lower the distance between cornhole board and a player. Also you could build your own lightweight cornhole bags, since the original bags are quite heavy (about 15-16 ounces which is ~450 grams).

Cornhole is not a complex game. But it can develop skills which can later be used for other sports such as tennis, bowling or other tossing games. 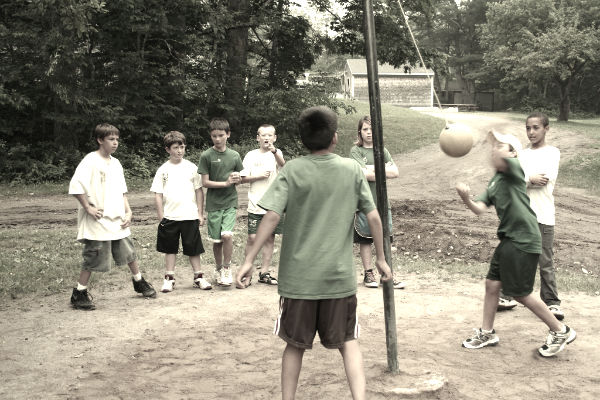 Compared to cornhole, tetherball is more a complex and more fun game to play with your kids.

It requires more energy which is great for stamina. This dynamic and exciting game will help them not only increase their energy levels but to socialize with other kids as well.

The rules are fairly simple. The game is played between 2 players who stand on the opposite sides of the tetherball pole.

Each player hits the ball in one direction. The winner is the one who manages to wind the ball around the pole all the way until it’s stopped by the rope.

But you can not grab the rope or the ball during the game. It will get you disqualified.

To spice it up a bit, you can add challenges to the game.

You can buy tetherball portable systems very cheap at Amazon.com.

See how exciting this game is. Take a look at this short video to learn the rules: 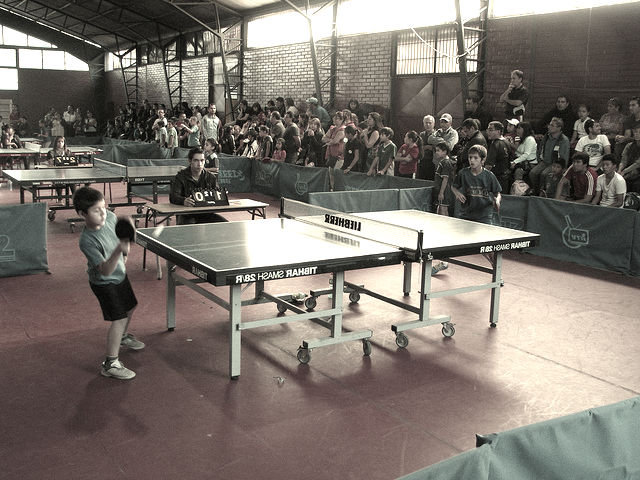 Table tennis, also known as ping pong, is another fun game that can be played outside. The only downside is that you won’t be able to play it during windy weather, since the ball is very lightweight.

The equipment is very light as well, so even weaker kids can play it. In my opinion it is almost as fun as real tennis, but it doesn’t require such a big learning curve or stamina levels.

It can be also played in doubles. Each team with 2 players, so in total 4 players can play at the same time.

You can also buy very quality table tennis tables on Amazon. However there are many parks that have ping pong tables built already. Compared to tennis, ping pong equipment is much more affordable.

Rules are simple, the one who gets more sets wins. Set is played as soon as one player reaches 21 points. However you don’t have to play in points. You can just do sparing and have fun.

Also to make it even more dynamic, you can play running ping pong. It is played with two or more players. Basically players run around the table in circle (one direction only) and hit balls to the other side. Each time you hit a ball from different side of the table. 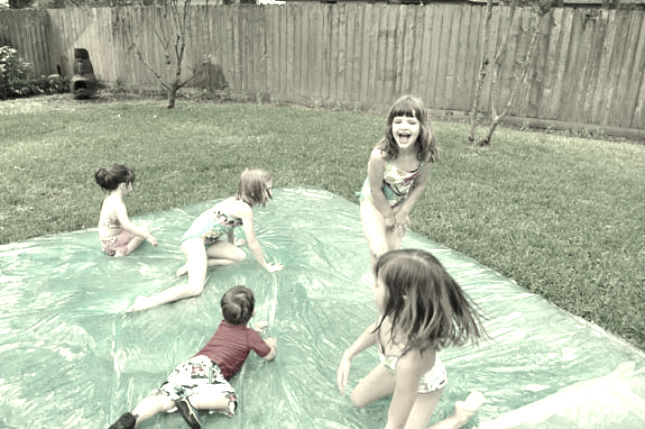 Another DIY backyard game! Water blob requires that you have your own backyard, so it can’t be played in public parks.

If you are not familiar with what water blob is, then take a look at this video:

This is a perfect activity for hot summer days. Similar to water bed, this is a large piece of plastic sheeting filled with water. Kids at any age can enjoy this game, it’s even very safe for toddlers.

You can buy water blob on Amazon, or if you enjoy “do it yourself” projects then take a look at this step by step tutorial on how to create your own water blob set. 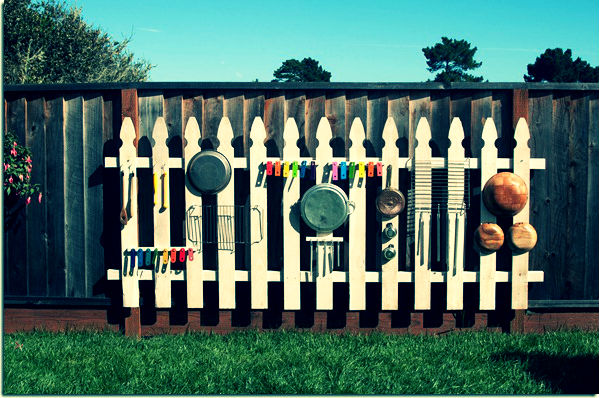 Is your kid musical?

Let them express their musical creativity on fresh air by letting them compose their own songs 🙂 Let them bang on pots!

Music is shown to increase productivity.

This can be annoying if you are outside or have a small backyard. Especially if your neighbors are close to your backyard. However if you have larger backyard then it’s fine.

Unfortunately this requires a bit of DIY manufacturing since music fences are not available for purchase. If you don’t want to ruin your fence, you can create several wooden pools and hang on the pots. It is relatively easy to create, just take a look at the image above. 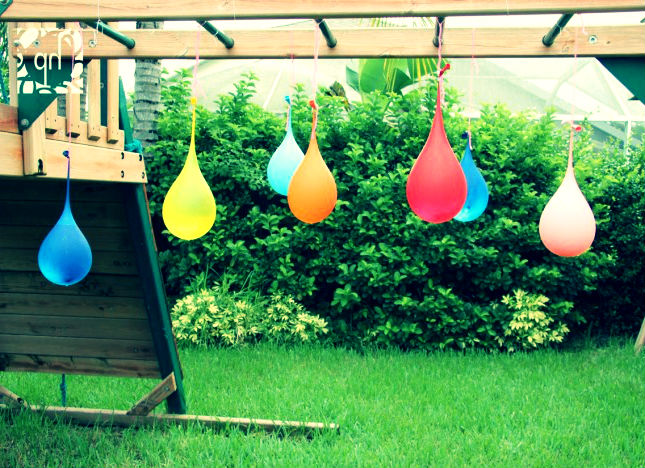 Another fun and exciting game for hot summer days.

All you need is several balloons, water, bat, blindfolds and a place to hang the water filled balloons.

The rules, you guessed right, the player who hits the most balloons wins. 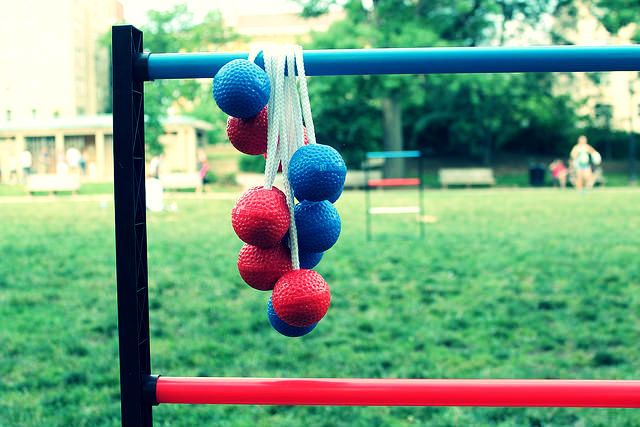 Ladder ball is one of the hottest outdoor games on the market right now.

Game is simple. You need to throw and hang bolas to the ladder. Bola is name for two balls connected by a string.

The rules are pretty straightforward. Each team has 3 bolas and the goal is throw them on the ladder. Each ladder rung has different scoring point. The rung at the top carries 1 point, the middle one 2 points and the bottom one 3 points. The player or team who first gets to 21 points wins.


Also equipment for this game is cheap or it can be created by following some DIY tutorial. Ladder ball set can be made for less than 40$ using PVC plastic and it can last whole summer.

So what are you waiting for? Have you chosen a game that you’ll play with your kids this summer?

Which one did you choose?