Cornhole is one of the most popular summer games in the US. Regardless of age and gender, Americans love to play cornhole at BBQ parties, tailgates, bars, and pubs. A lot of pro players even play tournaments and win exciting and valuable prizes.

What separates pro and a novice is the throwing technique. All pros were amateurs at one time. The 2021 American Cornhole Association Tournament finalists had one thing in common; they were all throw masters.

Achieving perfect throws is no rocket science. You can achieve a perfect throw with the right knowledge/training and some practice. While the practicing part is up to you, we will deliver the knowledge and tricks you need to master the art of throwing. 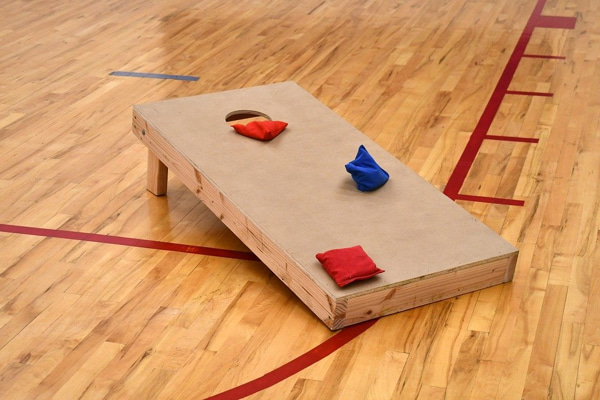 In this article, we will discuss how to throw the cornhole bag in the right way and according to the need of the game.

How to Throw Cornhole Bag

Let’s go over each to get the best spin! 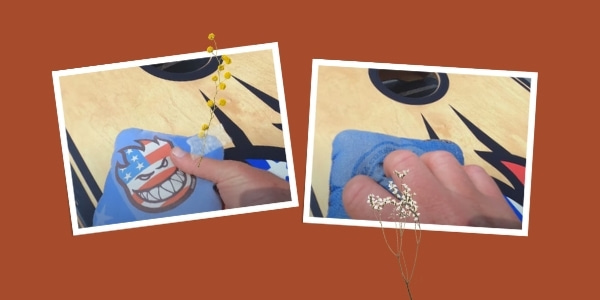 The first step in becoming a great cornholer is the right grip. Make sure that you distribute the weight of the bag evenly in your hands. An ideal grip will be the thumb on the outer side of the bag with 4 fingers underneath it and the seam position on the outer side of the bag. If the bag is imbalanced, it can conflict with your aim. Many people have a different way of throwing bags. You can adopt any style you like. We have listed the best way for beginners to follow.

The next main thing is the stance. There are two easy stance styles that beginners can follow.

Place your front foot adjacent to the board edge near the foul line and in line with your arm. Touching the foot with the board will give you the same stance every time you get ready to throw. Bend your knees a little bit and lean your body slightly to the opposite of your throwing arm, so you have enough space to spin your arm.

The other stance is the moving stance. A moving stance is followed by most of the pro players. In this style, you start your stride with your foot opposite to the throwing arm. Your arm swings back when you move forward, and then you throw the bag after another stride right before you reach the foul line.

Beginners must aim for the center of the hole as they can easily land the bag, and it is a risk-free shot. You’ll end up with one point for that throw even if you don’t put the bag in the hole. If you go for the hole, the bag may slip or may not even touch the board.

Once you get the hang of it, you can aim for the hole all you want. With practice comes perfection.

We have already discussed a couple of throwing methods above. Here we will discuss spin and arc.

Arc means how high you want the bag to go. Cornhole maestros recommend giving a maximum elevation of 5-10 feet to your bag. If you are throwing the bag while standing still, you’ll have to put in slightly more effort than a moving throw. The weight of your body is transferred to the bag, and it gives the bag an extra push.

You can also give some spin to your bag as it helps slide the bag on the table and increase your chance of holing it. Adding a spin to your bag is relatively easy but needs time, patience, and practice. The magic is all in your fingers. You can get some spin by flipping your fingers slightly when your release the bag.

Keep an eye on your bag until it lands on the board and hold your position for a couple of seconds. It helps you analyze your aim, throw, and spin. It also creates muscle memory which comes in handy for the next throw.

What’s the secret to successful throws?

Consistency: It is the pillar on which successful throws stand. Once you find what works for you, stick to it and follow it religiously.

Another important thing is your bag. A perfect throw is achieved only with a perfect bag. Bags lose some weight over time. Your bags could have a different weight after a season. This is particularly true for corn-filled bags as corn kernels turn into dust, which helps slide the bag on the board. Pellet-filled bags are also prone to weight loss but at a slower rate.

You must check the weight of your bags if you are playing with corn-filled bags after every season. An underweight bag will not give you a perfect toss. American Cornhole Association recommends the bag weight to be 14-16 pounds.

A few drinks with a cornhole game are a tradition, but too many beers can blur your aim and concentration, and you can lose the game. But who cares about losing, as long as it is for fun and you are having fun.

Cornholers across the US follow different throwing styles. You can try one of them and select the one which works best for you.

Sling Toss: Pinch the bag in a corner with your thumb and index finger to achieve a sling toss. Spin your arm backward and throw the bag at the board with an underarm throw. This style adds backspin to the bag.

Frisbee Throw: It is similar to throwing a Frisbee. Pinch the bag in a corner, turn your body sideways, and throw your arm while aiming the board. It is one of the most difficult styles to throw the bag but, once mastered, results in airmail most times.

Overhand Throw: Overhand toss is a technical method of throwing the bag at the board. It is pretty similar to throwing a baseball. The toss in this technique is either overhand or sidearm. It is also one of the most effective ways of throwing cornhole bags.

Fold-Over Throw: This one is quite interesting. You can achieve a fold-over throw by flattening the bag to evenly spread the filling. Fold the bag in halves like a newspaper or a cloth. Now throw underhand to get a nice spin and solid arc.

There is no set definition of throwing a cornhole bag, but you need something to start from, and it is best to start learning from the basics. Once you get a hold of it, who knows that you’ll be inventing a new toss style.