This family game is very similar to horseshoes but much safer because the tossing object is much lighter than heavy iron horseshoe ring.

In washers’ game players throw very light steel washers that can be found in any hardware store.

This old game has many different names, but in essence, those are all synonyms for washer toss. You can sometimes hear names such as huachas, Washeroos, Washer Toss, Hillbilly Horseshoes, Holy Boards or Washoos.

Players alternately throw washers onto a washers board. Each board, depending on the game type, has 1 or 3 holes in which players can throw washers. If a washer lands in the hole it’s worth 3 points and if it lands in the box its worth 1 point. The player or team who first reaches 21 points wins the game.

Washers can be played anywhere as long as washer boards can be placed on a flat surface 10 feet apart from each other. Distance between pits is usually determined by a string attached to the front of each box.

Just like in cornhole, each player has its own pitching box on the left and right side of a washer board.

The size of a pitching box is the same as the size of the board. In three-hole washer toss game, it’s 4 x 1 foot.

The foul line is in the same line as the front of the board, in other words on the front edge of a pitching box. If a player steps on or crosses the foul line its consider being a foul shot and it’s worth zero points.

Every toss must be from behind the front edge of the board.

Like in cornhole, players should maintain the same tossing side during the whole match.

Each team gets 3 washers, so in total 6 washers are tossed in each round (2 players and 3 washers).

the board. Once all six washers are thrown the round ends. 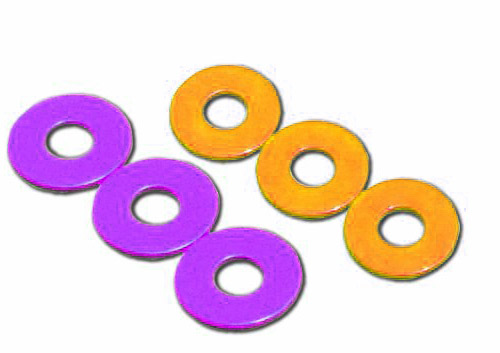 There are several versions of washer boards available. Depending on your personal preference you can choose plain wooden board, carpeted board or rubber covered board if you want to add bounce effect. 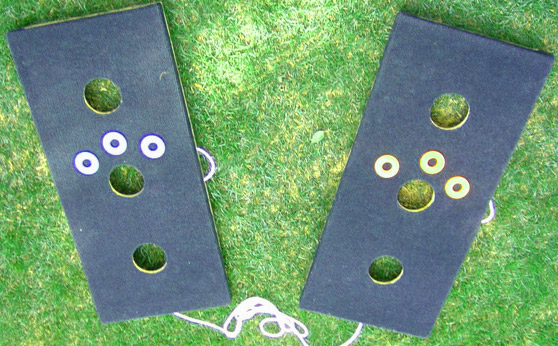 According to official rules, each board needs to be 4 feet long and 1 foot wide.

Since this is a 3-hole type of game, logically, each board needs to have 3 separate holes with 12-inch space between each hole.

Washers should be galvanized and have 2-1/2 inch in diameter and 1/8 inch thick.

If you are into DIY projects then take a look at this short video on how to create your own washer toss boards:

The main goal of the game is to toss metal washers into a hole.

Each hole carries a different number of points, as you can see in the scoring section below.

The first player who reaches exactly 21 points is the winner.

Players alternately throw washers at a washers box. Honour to throw first has the team/player who has won the previous round. But in the first round tossing honour is determined either by flipping a coin or scoring a washer in the hole.

Since this is a cancellation time of game each team has an opportunity to cancel opponents result on the round level. So for example, if Team A scores 3 points in a round then if Team B also scores 3 points those two scores cancel each one out. Which means in that round the result is a tie and no one adds points to the overall game score.

The second example is when Team A has reached 21 points in overall game score and now Team B has an opportunity to cover their winning result and avoid losing the match.

If Team B has thrown all of their washers but still didn’t cover the winning result (21 points) of Team A, they can use Team A’s leftover washers and try to cover the result. Off course, this is only in a situation when there are some leftover washers available.

So if Team B manages to score 21 points and cover the winning results, any leftover washers are returned to team players respectively. Then the standard game is continued.

Like in cornhole, each player must remain in its pitching box when throwing a washer.

Washers can be thrown using ONLY underhand toss. Any overhead or two hand throw is forbidden and considered to the foul point. The washer that was inadequately thrown must be removed from the playing field immediately.

Pitching boxes are located on the left and right side of each washer box.

Washers are allowed to flip, bounce and roll before scoring in a hole. However, a washer may not roll, bounce or flip off a person or ground. This is considered to be a foul point and carries ZERO points.

Two players alternately throw washers from the same platform. Once each player has tossed all 3 washers the round ends and players walk to the opposite platform, maintaining the same side, to calculate results and pick up washers so they can begin the next round.

The player who had the highest scoring in the previous round has the honour to throw first in the next round.

Players from the same team should stay at the opposite platforms but on the same side.

Each team can throw 3 washers in each round. So in total 6 washers are thrown per round.

Each team must have a different colour of washers, so it can be easily spotted when it’s on the board.

In order to determine which team is going to throw first, each player should toss 1 washer to the board. The player whose washer scored the highest point will toss first. This method of determining the first thrower is called “Diddle”.

In every next round, winner of the previous round has the honour to throw first.

Once all washers are thrown by both teams the round ends and the score is calculated. Cancel points from each other and add the point difference to the highest-scoring team.

In the next round, the team players on the opposite side now have turn to throw.

In doubles plays the overall game result can exceed 21 points. That means the match is played until one team REACHES or EXCEEDS 21 points.

When a player cancels out opponents score. For example, if Player 1 scores 9 points in a round and then Player 2 also scores 9 points then these two results cancel each out, this is also called covering.

The bust is a term used when a team or player exceeds 21 points. As you already know in washer toss players need to score exactly 21 points. Once a player busts, the score is automatically reverted to the previous results and the opponent has turned.

If the same player/team gets two busts in the same game then its an automatic loss of the match. 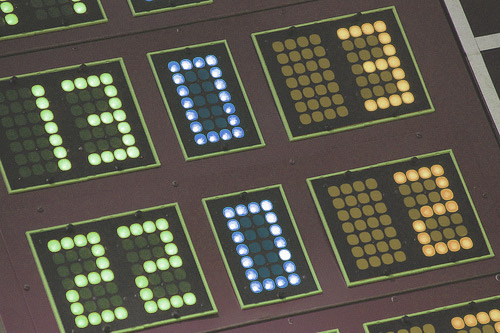 It is players responsibility to keep the score after each round.

This game uses the cancellation type of scoring, which means that a score is calculated after each round. Basically, if you hit the same hole that you opponent hit, you cancel their score.

Which means that after each round points are cancelled against each team. The team who has the highest round score adds the point difference to the overall score.

Round scores are added to the overall score.

The first team/player who reaches 21 points wins the game.

Round is over once all 6 washers are thrown. (3 by each player)

1 point for the nearest hole

3 points for the middle hole

5 points for the farthest hole

The washer needs to be in the hole to score! Every washer that ended anywhere but in the hole carries ZERO points. There are no closer-to-the-hole or leaner type of points in this game.

Also if a washer was first in the hole and then jumped out of the hole it is considered to be a foul and it carries ZERO points.

If a washer hits the ground first and then bounces on to the board it carries zero points and should be removed from the playing surface immediately. 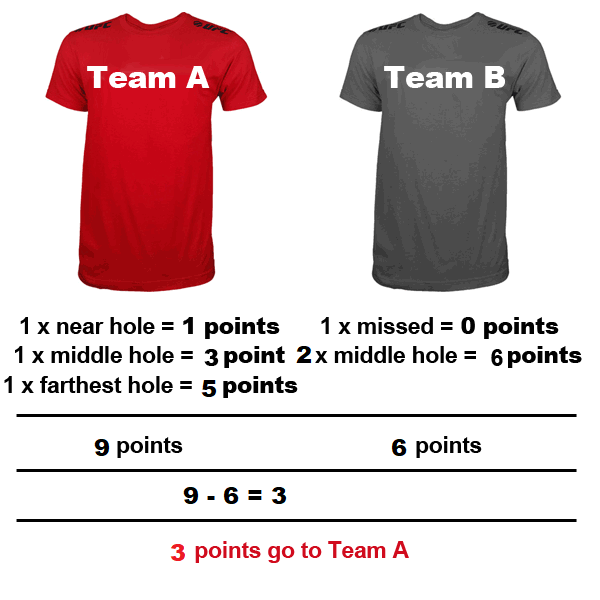 Let’s look at an EXAMPLE:

Team A scored 1 washer in each hole. So 1 washer in the nearest, 1 in the middle and 1 in the farthest hole. This means that Team A has scored 6 points in this round.

Team B had 1 miss and scored 2 washers in the middle hole. This means that Team B has scored 4 points in this round.

Since this is a cancellation type of game we need to cancel these two results.

Team A, the highest-scoring team, adds the point difference between the overall game score.

Team A adds 3 points to the overall score. 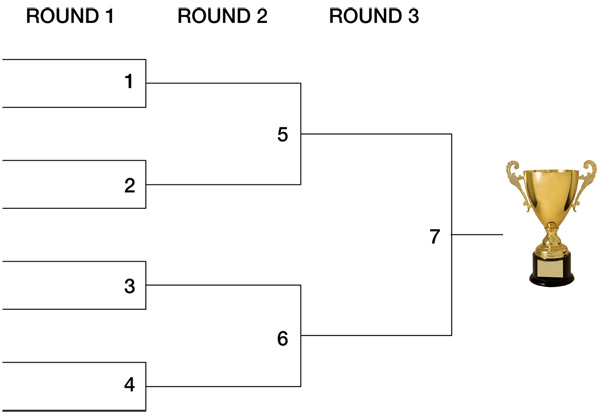 All equipment, including washers and boards, should be supplied by the tournament organizer. In order to ensure standardized tournament, players are not allowed to bring their own personal equipment.

Washer toss tournaments can be organized in the same way as cornhole tournaments. You can play double elimination, single-elimination or round-robin.

Use tournament brackets for monitoring which teams should play in future matches. You can download free brackets on this website.

Every tournament needs to have an official referee. Every team is responsible for reporting their final score to the tournament director.

Any disputes or scoring conflicts should be resolved by tournament referee.

Every decision that is made by the tournament judge is final.

What is the difference between cornhole and washer toss game?

Washer toss game is derived from cornhole. All board and bags games have their roots in cornhole. Cornhole is played with 4 bags for each team, but a washer is played with 3 washers. The number of boards is the same, but the cornhole board has one hole, but washer toss game boards have 3 holes. Its board is 1 foot wide, whereas the regulation width of a cornhole board is 2 feet. The length of the boards is the same in both games. Washer boards as placed 10 feet apart, whereas the official distance between cornhole boards is 27 feet. The scoring mechanism is also different. In a cornhole, you get one point for a bag on the table and 3 points for the bag through the hole. However, in the washer toss game, you get 1 point for the nearest hole, 3 for the middle, and 5 for the farthest hole. A washer anywhere else results in zero points. The final score is calculated by canceling method in both games. The official version of both games states that the team to reach 21 points first wins the game.

What is the difference between bags for cornhole and washer toss game?

In the washer toss game, metal washers are used instead of corn-filled or resin-filled bags. Cornhole bags are filled with corn or resin pellets.

Which is more fun; cornhole or washer toss?

Each game has similar gameplay but unique equipment. Cornhole is more commonly played than washer toss. We suggest you try both games and then decide for yourself.

Which game do you prefer, cornhole or washer toss? Why?